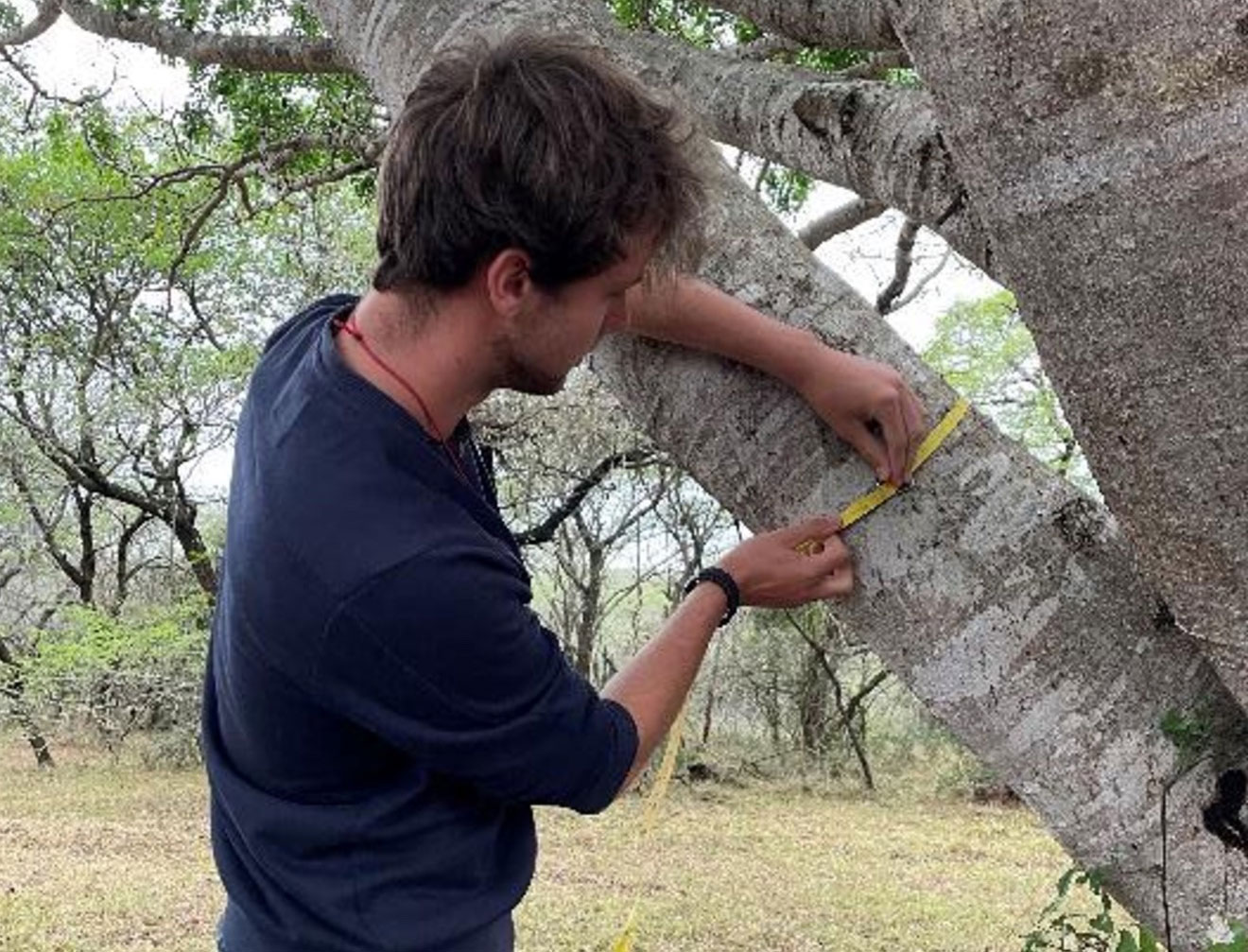 Participating to the fieldwork was not just being in the Ndumo game reserve for two weeks. Mentally and practically all the students had to get ready. Our brightest memory is about when we received the confirmation, we were going to South Africa! Everyone was excited, but since then we started considering the first bureaucratic procedures, first above all was the visa procedure. Here our group of roughly 50 students has been differentiated for the first time in this journey. After a quick online search on if each country had a visa agreement with South Africa for at least two weeks, many had discovered that they had to apply for the visa. Mainly students coming from the global south and few countries in the European Union, speaking about global differences. The writer of this piece of text did not have to do the visa process, but others did and sharing information on the whatsapp group through this burdensome procedure, our excitement for this important trip was growing. After the visa, the second big step was the vaccinations, many information were given to me, most of them not true for our specific case, but considering how remote Ndumo is we cannot blame the doctors. To complete the “before-leaving” procedures, we had to fix the paperwork with KU Leuven regarding our insurance and our request for a fieldwork abroad. Also, this took some time, but after we could think of how amazing the fieldwork would have been.

Travelling has been a great part of the experience. Most of us travelled from Europe, spending roughly 10 hours on planes. Most of us coincidently met someone else, perhaps at the starting airport, or at the layovers. The chances of meeting during our flights were something we did not consider but thinking about the probability, it was pretty high. We have not travelled only by plane. When we arrived, after the first presentations in Johannesburg regarding what we were going to do on the field, we travelled for others 11 hours in the vans, to reach Ndumo. When we arrived, you can imagine how tired most of us were (and the staff), then we saw the tents, and we realized that a comfortable sleep was still not waiting for us.

The staying was in a place difficult to imagine. Inside a natural reserve, with animals: giraffes, monkeys, spiders… The Northwest University (South African partner university) staff gave us an introduction on what to expect wildlife-wise. Many were scared after. Dangerous spiders, scorpions, ticks, bats, they were all present in the camp. Interesting enough, only the first days were stressful, after you easily learn the dos and the don’ts regarding what to do in your tent and outside, to keep you safe from unwanted visitors. On the deck where we were used to eat there were plenty of bats who were flying above our heads, some got stuck in our companions’ hair, but we got so quickly attached to nature that we were not caring about them that much anymore. These few lines should give you a feeling of the environment, it was somehow dangerous, but amazing. We could see plenty of starts at nights, hear a full-on concert provided by the local birds before sleeping and some monkeys just being fun around the camp.

Leaving the camp was not easy, it is such a place that you have the opportunity to experience few times in life, perhaps only once. It is magical how not having internet, electricity, warm water, can pushes the inner you beyond the boundaries of sociality, creating a firmer bond with the others sharing your same experience. Still, the travelling was long, as 11 hours of car were in front of us while tons of memories were recalled by our mind, because other than the work, we have celebrated in the deck outside the main building, getting to know the others to a such extent and in such a short time that would have been unimaginable otherwise.

We got back to the hotel in Johannesburg, the city from where many had their flight back. There was a sort of dealing with reality because it has been such a different experience that you needed some time to rationalize. Goodbyes and hugs did not miss between us, as we knew we were able to see each other just shortly in the second semester before everyone graduates and our paths would be more distant.

As land carbon group we wanted to assess how much carbon was stored in the land nearby the Ndumo Game Reserve and inside of it. We did so because it would be possible to introduce the area in a carbon market, granting a flow of money to Ndumo that possibly enhances the standard of livings in the area. Furthermore, carbon markets address one of the biggest problems of our generation, which is climate change. This due to the forests that can mitigate it through storing carbon, decreasing the local temperature, improve evapotranspiration and increase biodiversity. To assess how much carbon is stored, we defined 11 plots through GIS, we picked this based on lack of data from previous years. As combining the existing data with the one assessed during this living lab would give a more precise overall carbon storage capacity. We divided the carbon storage assessment in above ground biomass (wood), below ground biomass (roots), and soil organic carbon (mineral soil); while dividing the assessed area by their land uses: Forested lands, grasslands, wetlands, built ups, cultivated. We collected the data regarding wood and roots through assessing the trees. We did so by measuring their circumference, their height, counting the number of trees present on the plots, and identifying the tree’s specie by analysing its foliage. Regarding the mineral soil, we dug the ground on the various plots, taking three sets of samples divided by their depth into the ground: 0-5 centimetres; 5-15 centimetres; 15-30 centimetres. We divided the samples by plot’s location and depth, then we measured their weight before and after heating them through an oven. By doing so, we assessed their density when moist and dry, being able to calculate their carbon storage through a scientific formula used in these cases. When we gathered all data, we run a carbon storage model named InVest, which visualizes where carbon is stored on the area of relevance. By having the model’s results, we convened that higher carbon storage is present in lower elevated areas, around wetter pathways and pans, and in areas with higher biodiversity. While on the land use type, the cultivated lands are the ones capturing the most carbon. After our presentation with the findings, we showed that a project would be feasible especially due the high biodiversity in the area and the difficult socio-economical conditions, which generally increase the value of marketized projects. 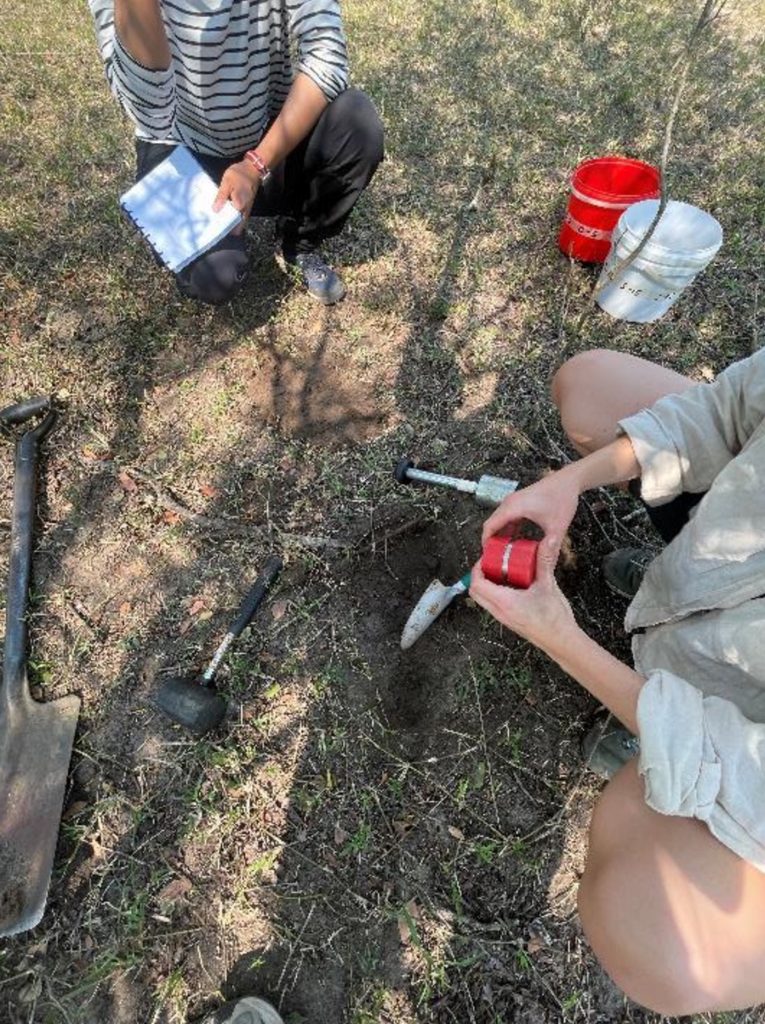 Work fatigue had been something we had to consider. Different food, load shedding (a scheduled lack of electricity of 2 to 6 hours), long talks at night, they all rescheduled our routines. We had to organize ourselves under multiple point of views, bringing plates and cutlery to the meal room, when to charge our phones according to load shedding, laundry… we had to be organized, and this brought our survival skills to a new level which will come handy to all of us in every stage of our life. Still, even if fatigued, the activities were so new, challenging, and interesting that after the wake up at 6AM every activity would push you forward to discover something more.

On a personal note, South Africa has been something out of our comfort zone. You could feel in Ndumo to be outside the West, for how people think and behave. This is not something that one should not consider, even when visiting countries as South Africa one could simply go to Cape Town, visit some lovely vineyards,

do snorkelling and see whales while not having be in touch with the African cultures. Experiencing this let you realize how different, sometimes clashing, worldview exists.

The two weeks of the living lab and the thoughts and activities before and after having opened a new shelf in our mind, one of the most colourful, with not only nice and bright colours but also difficult and dark ones, because such trip leaves you many questions that enrich you while at the same time depriving you of apparent certainties. Why should some live with so few resources while others can afford everything? Why did we lose such an intimate contact with nature? How will we ever be able to completely understand such a different culture? These are all questions that the living lab has left us and of which we are thankful for. 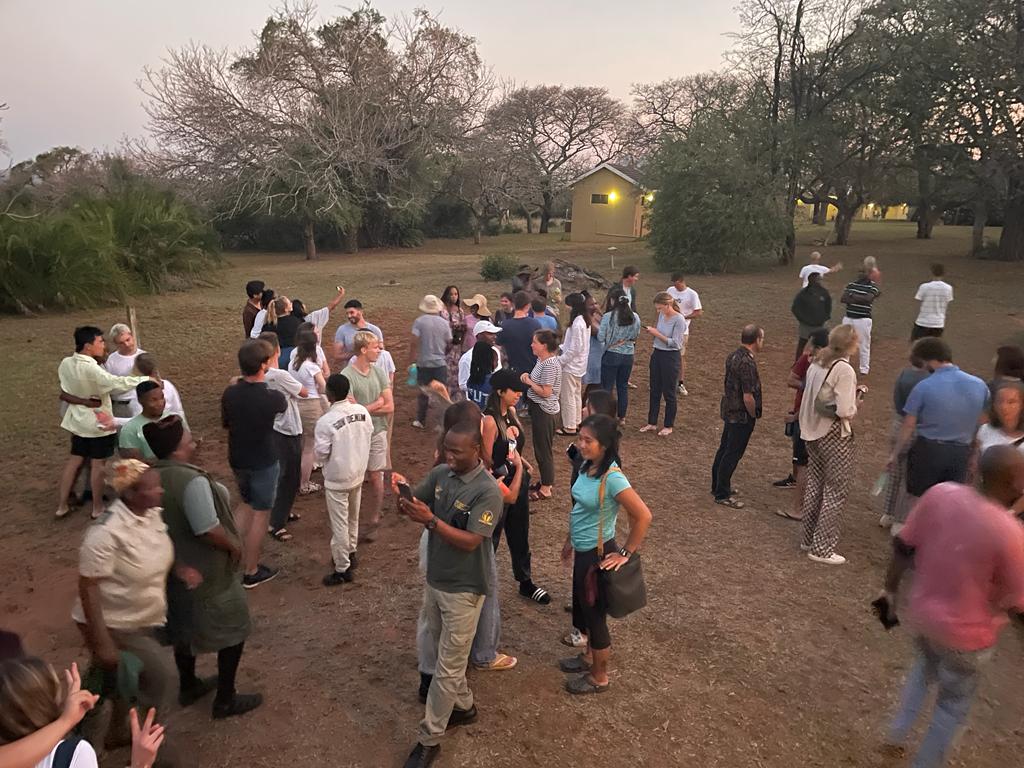 around 80 students and professors were at the camp © SUSDEV 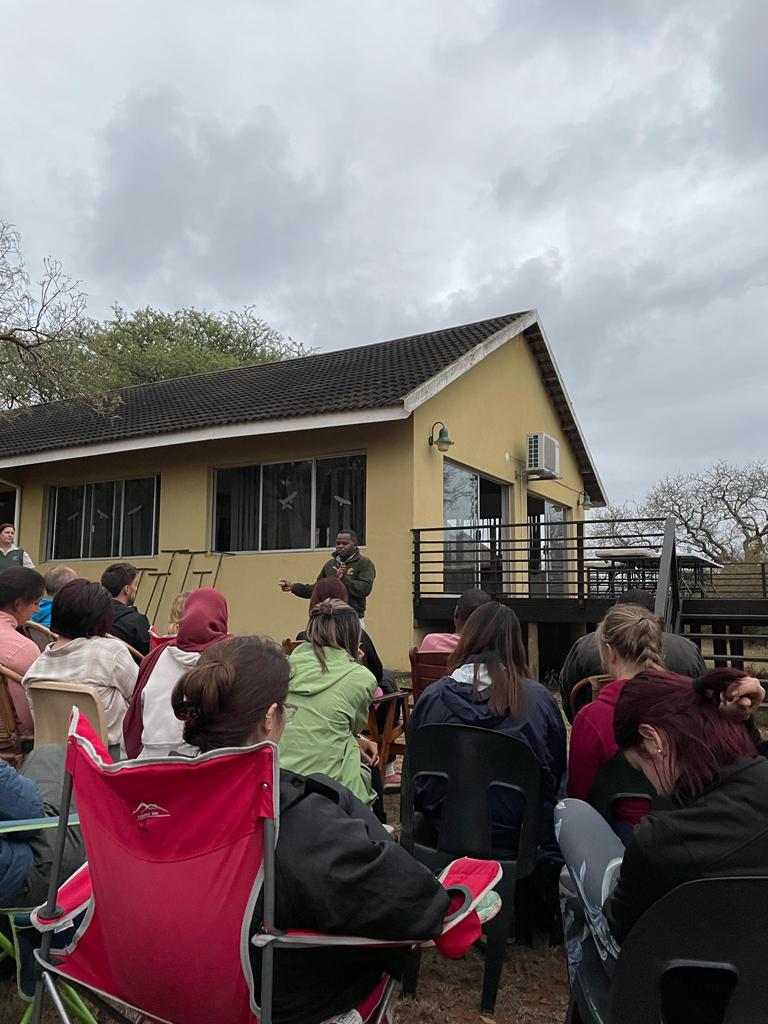 Lack of electricity (Loadshedding) was a common circumstance in Ndumo © SUSDEV 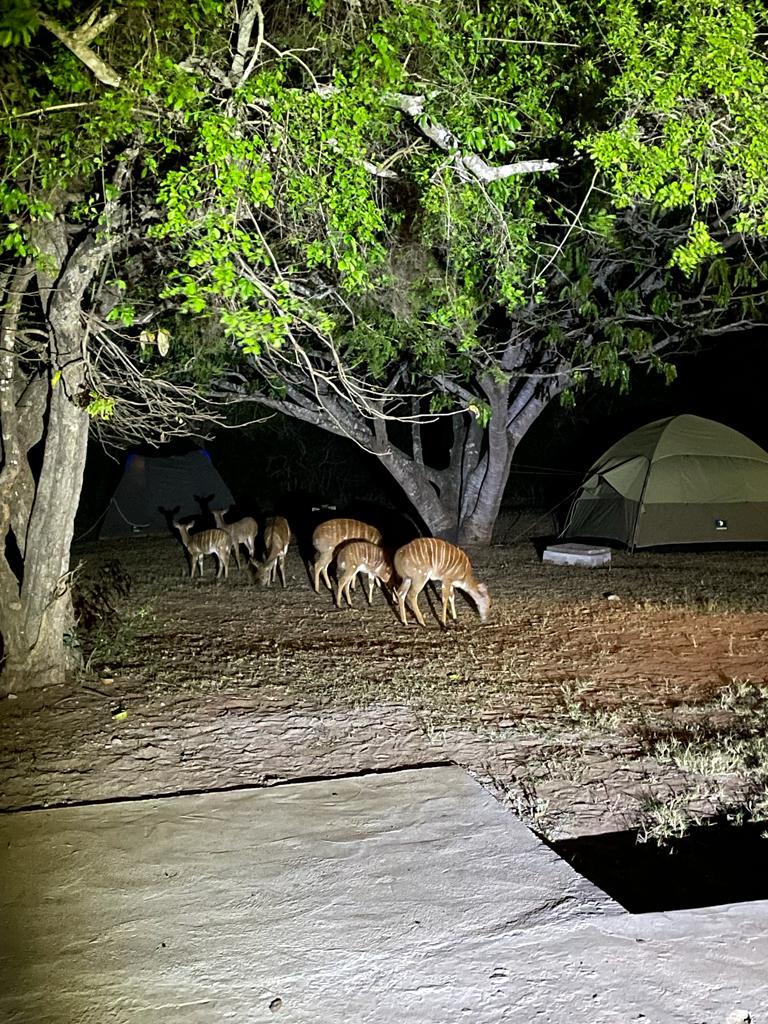 Animals at campsite: we had different visitors during our stay © SUSDEV