Hearts united by the fire: a day of researching firewood use in South Africa 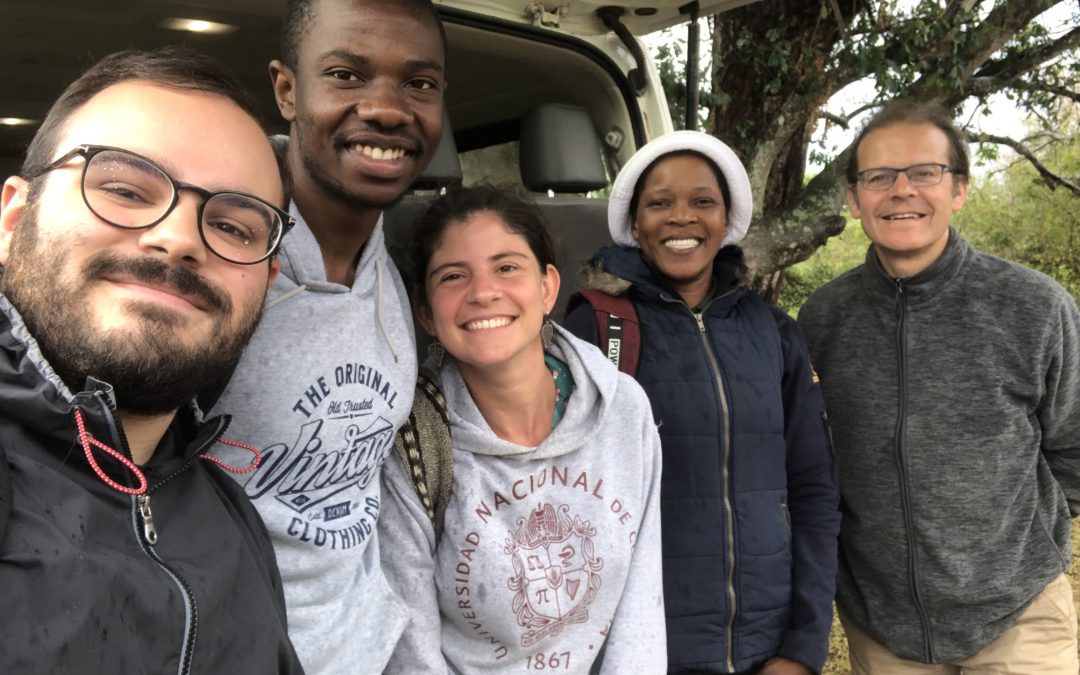 Monday, 19th of September 2022. We were in the Ndumo Game Reserve, South Africa, participating in the fieldwork for the Living Lab 2022. On that day, I was assigned to collect data for the Land group. That is the group I was placed in to prepare the action plan for the fieldwork, and that is the group with which I am now elaborating a development plan – more specifically, with the Firewood subgroup. For that reason, I want to share my experience with studying firewood in the Ndumo region.

First things first: a brief explanation of what we were doing there. In preparation for the fieldwork, the Firewood subgroup developed two questionnaires, one for households and one for sellers of firewood. Our goal with that methodology was to collect information about the consumption of wood as a fire source in the region. We would go from door to door, interviewing people about how they access and use firewood in their daily lives. The collected data can, then, be used to improve the environmental quality and public health of the region.

Now, back to the 19th of September. It was a very hot and sunny day, not the kind of day one would want to walk around under the sun near a paved road. Unfortunately, that was exactly what I was doing to conduct the questionnaires. But I suppose it would be worse if it was raining…

The van dropped us off. We were a smaller group of six people in charge of the interviews. Out of the six, there were four students and two translators, one for each pair of students. The others went with the van to take soil and tree measurements. That was the cue for us to start conducting the questionnaires.

Together with me there were two people. One was a student from Northwest University. She is from the Mpumalanga province, in east South Africa, and she speaks isiZulu, which was very helpful, considering that it was the language generally spoken with the interviewees. The other person was the translator, an employee of the Ndumo Game Reserve. Since it was the last day of fieldwork, she had a lot of experience with conducting the questionnaires.

We were heading for the first household. On the way, there was a primary school. The sound of all the children inside, playing and running around, was a joyful greeting to our group. Quite a nice way to start the day, in my opinion. At around 9:30 AM, we started the first interview. The man we were interviewing received a phone call in the middle of the interview, but he was done with it quickly.

At around 10 AM, we were conducting the second interview. Afterwards, we were already familiarised with the main cooking devices used in the region. 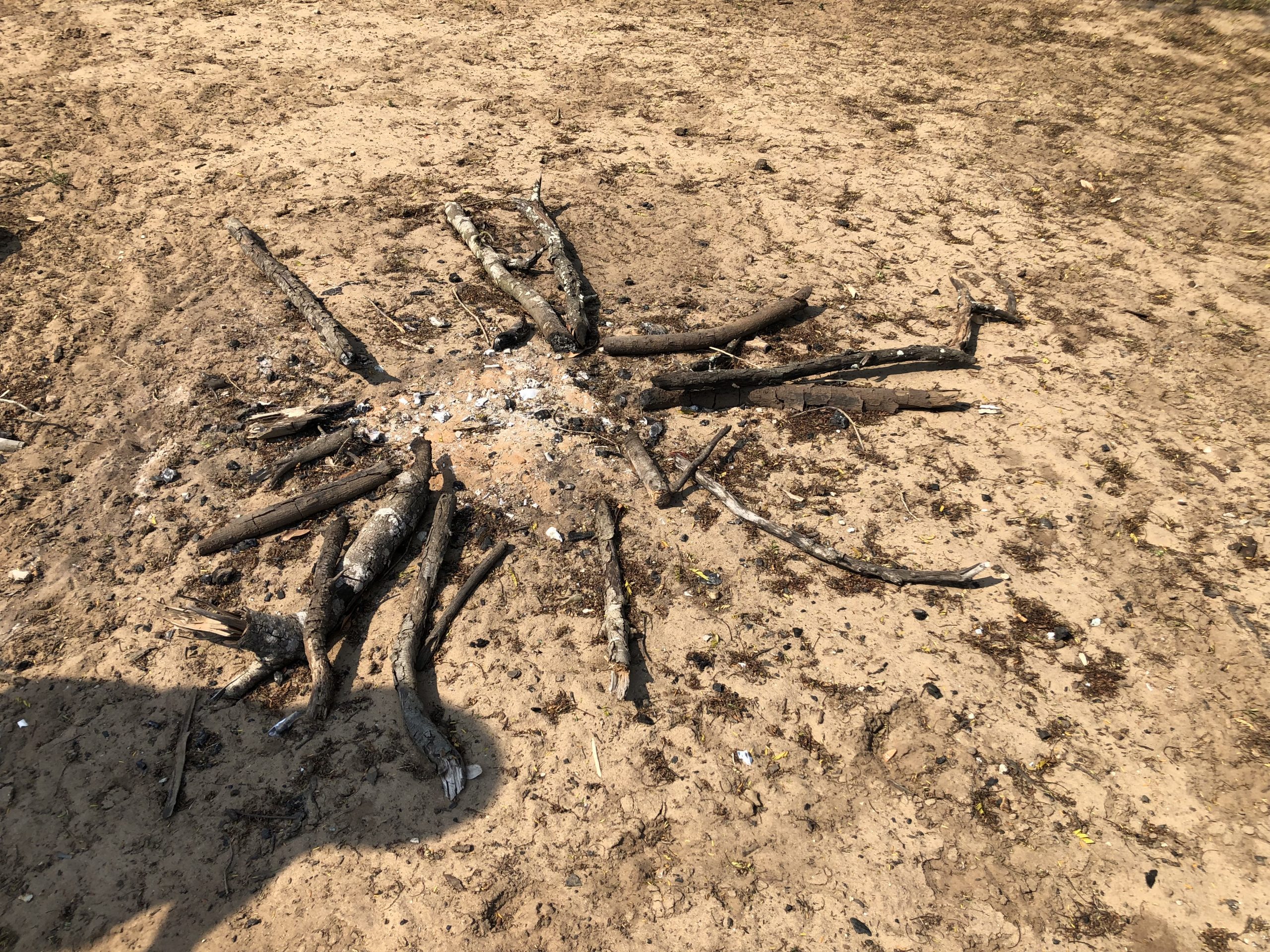 Almost all households interviewed use firewood for cooking, which is generally done in open spaces. In the picture above, you can see how the wood is arranged for cooking. 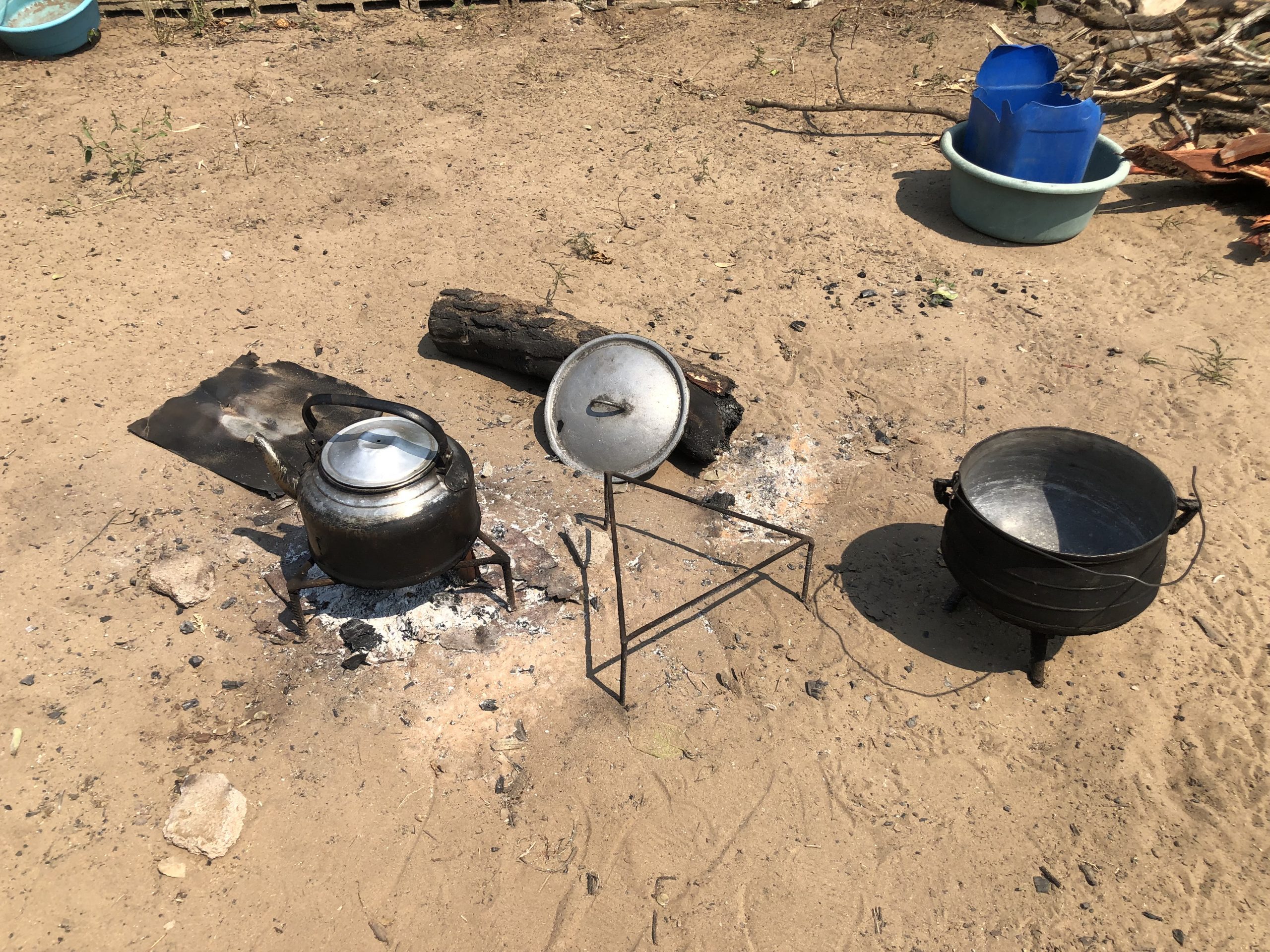 Some improvements can be made to the ground level cooking scheme. For instance, some households implement the tripod shown in the picture above. It is also possible to do that with three stones. 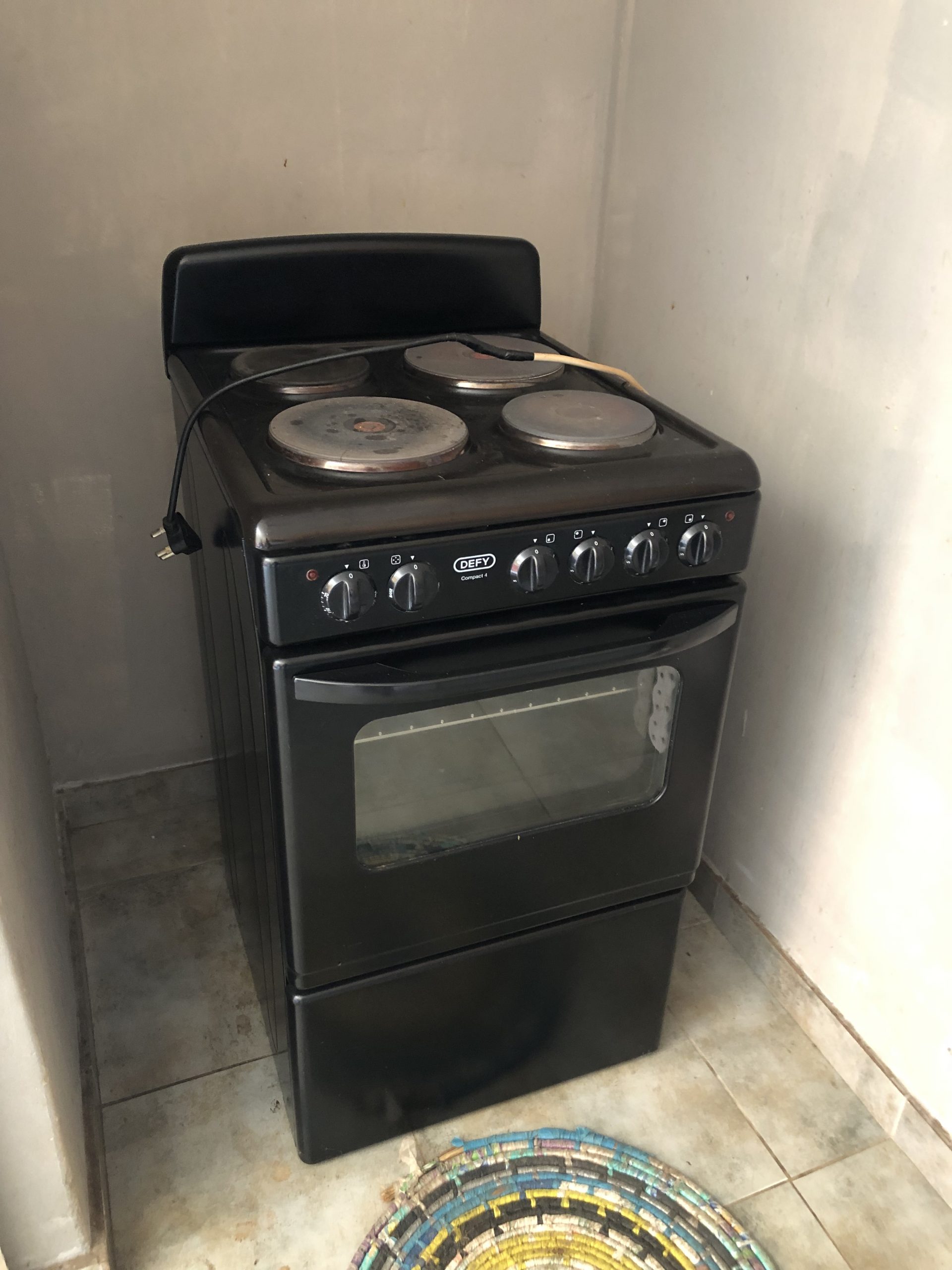 Many households also have gas stoves or electric stoves, such as the one shown in the picture above. In fact, more than half of the interviewees own an electric stove. However, almost all of them use firewood for cooking, not only because of the expensive price of electricity, but also because of loadshedding. Because of crises in the provision of energy, South Africa has been under a regime of planned power outages for years.

By 10:30 AM, we were already on our way to the third household. We came across a roadside shop where three women were chopping firewood for sale. The wood was beautifully displayed, separated in piles of on average five small logs. There were also some bigger logs, as well as some pieces of wood specifically sold for construction purposes. All of the wood was of a beautiful dark red colour. We talked with the firewood sellers and conducted one traders interview and one household interview, since their house was just behind the shop. 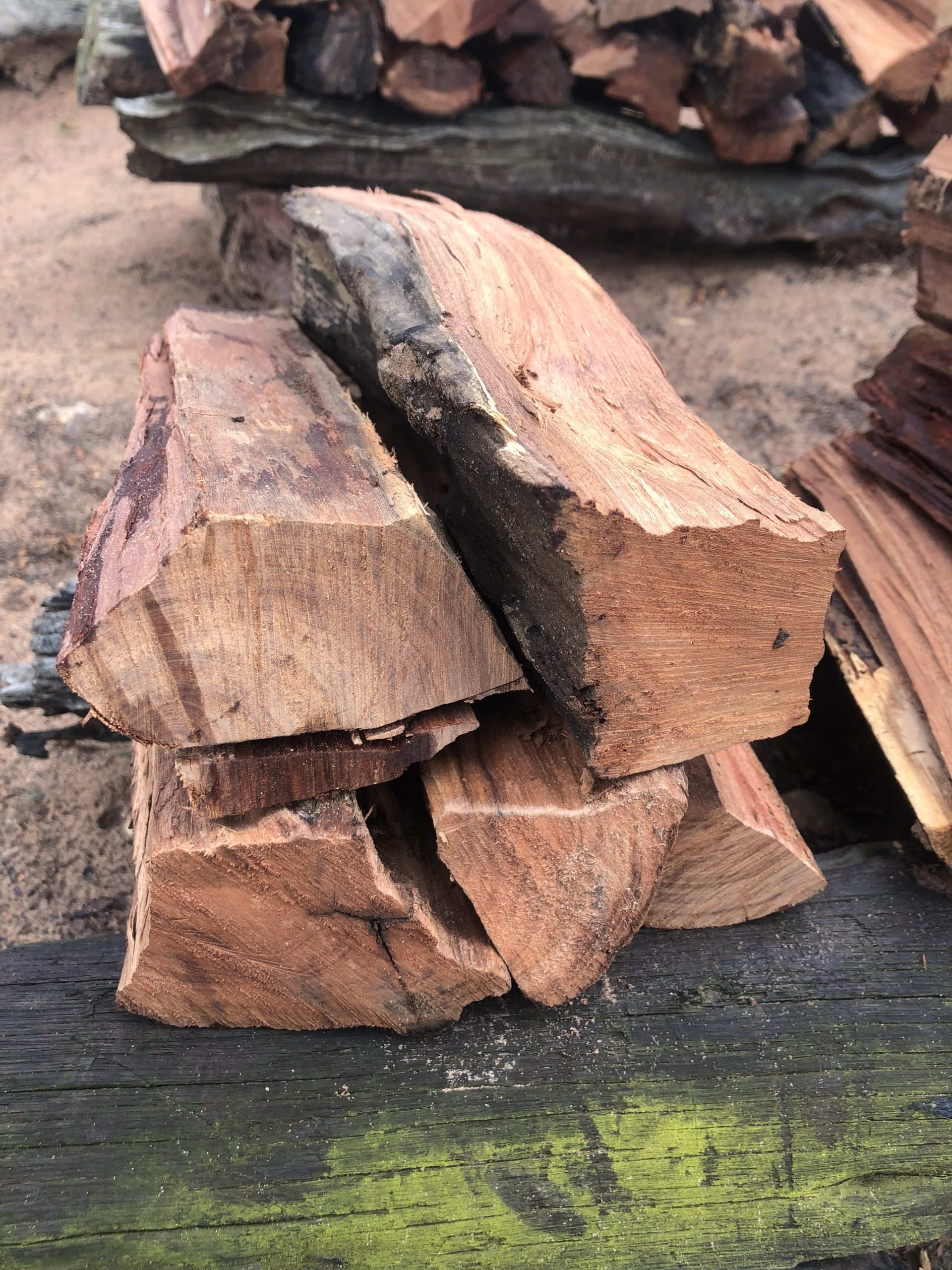 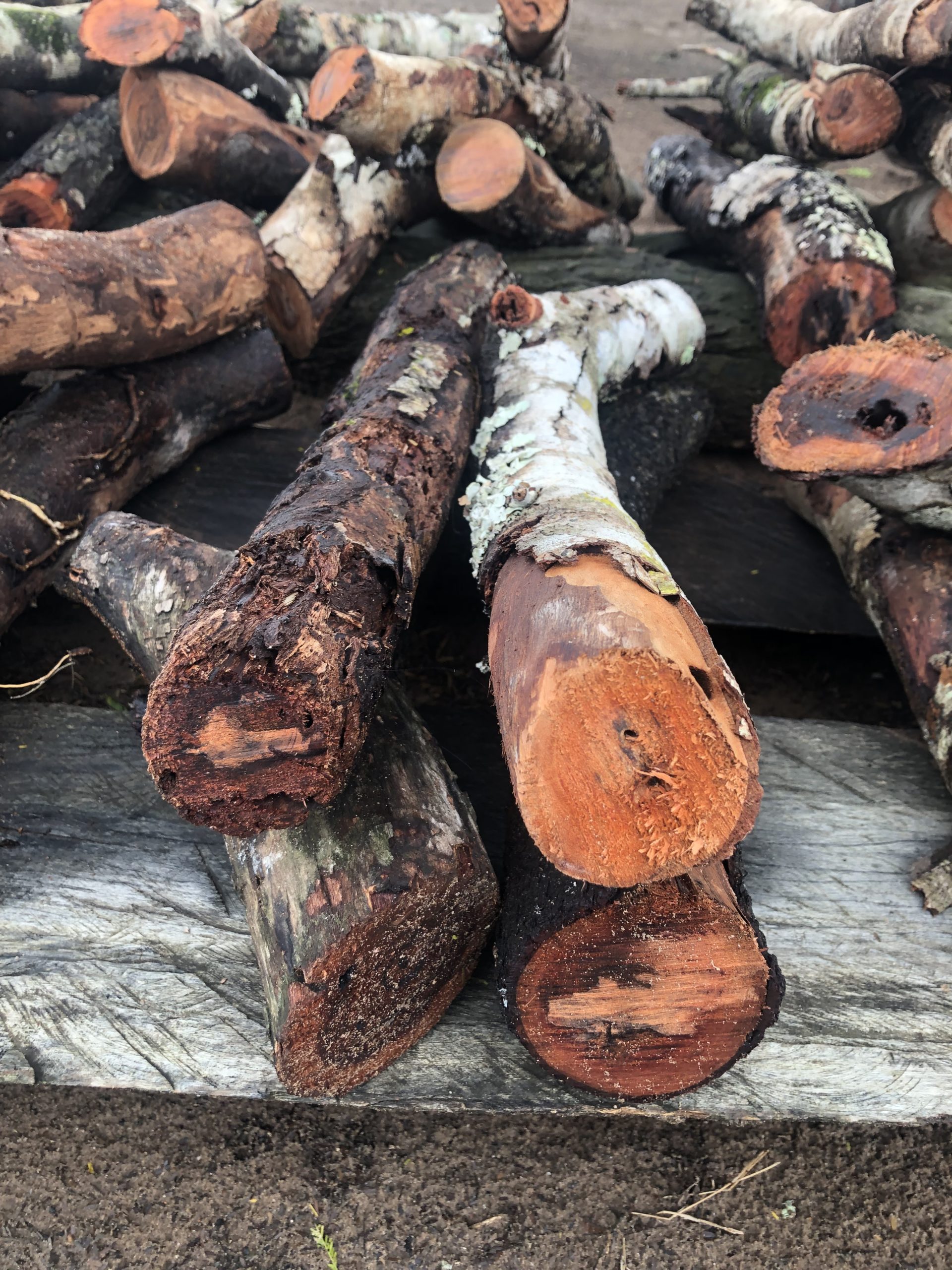 Afterwards, we conducted a fourth and a fifth interview. The fifth one was especially significant, because it was the only household interviewed on that day that was not connected to the local electricity grid. The woman we talked to was clearly unsatisfied with that fact and with her lack of an electric stove. Back then, I reflected about the importance of having socially motivated research and of communicating local needs and concerns to political authorities.

At around noon, we had a lunch break. We reunited with the others who were collecting samples from the plots, which was a nice opportunity to exchange experiences. Before going back to work, we were given the chance to change activities, from plot sampling to conducting questionnaires, and vice-versa. Since no one wanted to change – and neither did I – we continued with the interviews.

Our next stop was another roadside firewood seller. The man not only sells bundles of firewood, but also beautiful handmade straw handicrafts. I commented on how charming they looked with my two companions, and then ended up buying one as a souvenir. Just as I write this sentence, I can see the straw bowl sitting on my shelf, a special keepsake of that sunny day.

After interviewing the firewood trader, we conducted our sixth interview. We talked to an old man under the shade of a big tree. I consider his property to be very impressive, it is big and full of trees. Then, at around 1:45 PM, we walked a short distance to what would be the last interview of the day.

Out of all the interviews, the last one was the most unforgettable to me. We started by interviewing the woman, once again sheltered from the sun under a tree. To assess the household’s cooking practices, we asked her to show us where she cooks her food. That was common practice for all households, nothing special. However, as I was taking pictures of her electric stove, I asked her if she wanted to be in one of the pictures. 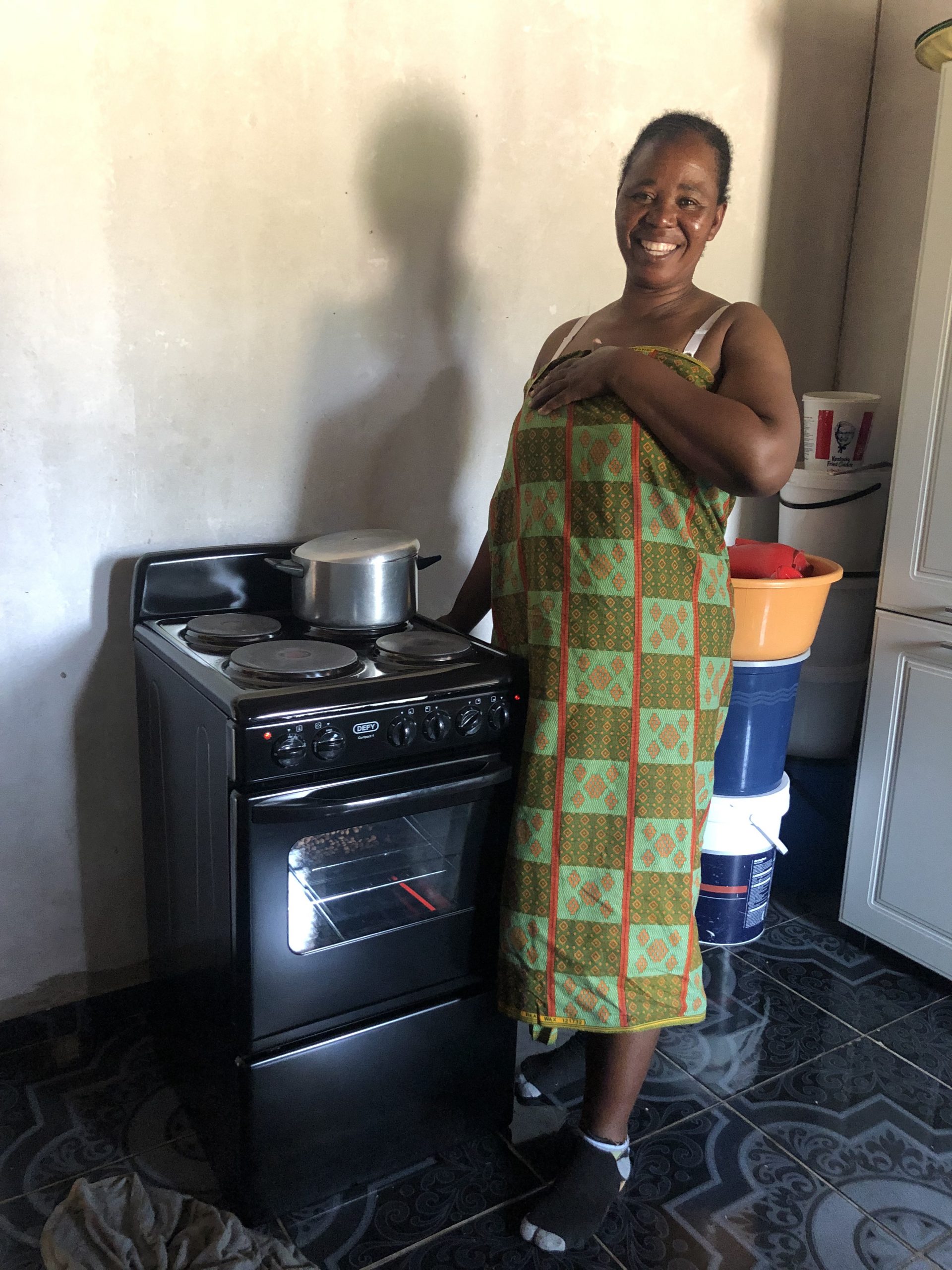 A woman and her electric stove © SUSDEV

I think this picture is very significative, clearly showing her pride in affording an electric stove with her and her family’s hard work. It also represents the hospitality with which we were received in Ndumo, and the meaningful moments we had during the days of fieldwork there. They were days of connection and exchange with the people we met, and of many learning experiences. I have learned a lot from the Ndumo community, and that is the main message I want to express in this blogpost, through some things we have learned.

My special thanks to my colleagues Eunice, Irene, Melissa, Taurai, and to professor Bruno, for sharing this experience with me.