Catching aliens in the water 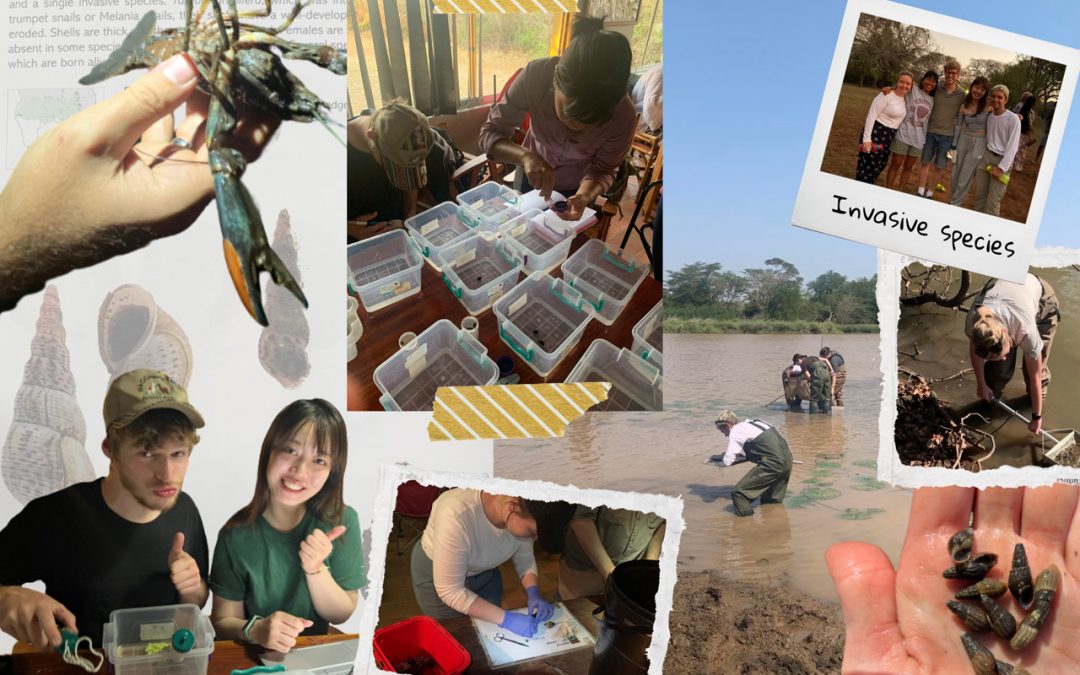 In September 2022, students of the Sustainable Development master’s program went on a trip to South Africa to participate in the Living Lab course. Students and professors from KU Leuven and North-West University in Johannesburg joined forces to conduct research in the Ndumo Game Reserve in the KwaZulu Natal province, the eastern part of the country. To cover a broad range of research topics, we were divided into several thematic groups where each group consists of 5 students with varied backgrounds, some are from the ecology track while others are from the space and society track within our master’s. 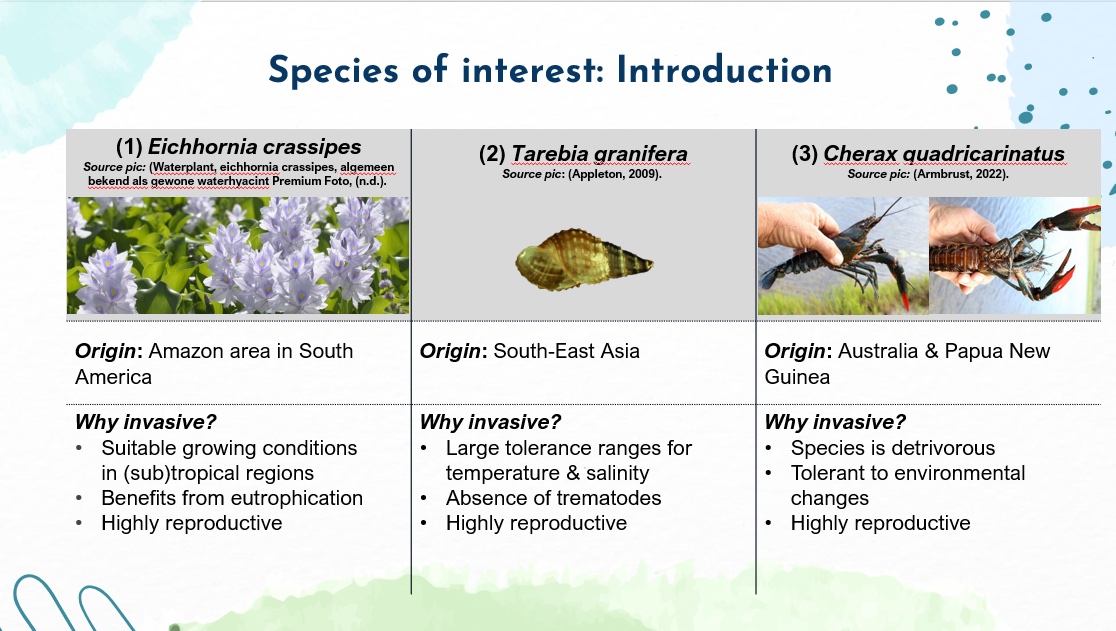 Collage of pictures from our group in action; collecting and analyzing our caught ‘aliens’ © SUSDEV

Our group focused primarily on invasive species and their impact on native species, biodiversity, and water quality of the Phongolo and Usuthu rivers. As for the various invasive species, we selected three species of interest: the freshwater snail (Tarebia granifera), the red claw crayfish (Cherax quadricarinatus), and the water hyacinth (Eichhornia crassipes). We examined their presence in both rivers and compared findings between the two sampling areas, inside and outside the Ndumo Game Reserve. Comparing these areas will allow us to evaluate the conservation practices of the Reserve.

It has been our great joy to have Dr. Lizaan de Necker, a professor at the North-West University, to guide us during the preparation and execution of our research in South Africa. She led the five-days fieldwork on our topic. However, we were also responsible for collecting data on invasive species with other group members. The most important and time-consuming task was catching snails. For this we used a special scoop net to filter the snails from the dirt. This was not easy without getting dirty! If there were large leaves, like water lilies, or stones we also checked them for snails, and picked them up. Meanwhile, the crayfish were caught by electrofishing and the invasive plants were visually estimated.

When coming back to camp after a day of fieldwork, we sat together with our group, added the data to our excel-file and did some additional tasks. Firstly, we conducted a feeding experiment. We collected snails (native and invasive ones), starved them, measured them and put them in separate plastic boxes with a piece of lettuce. At the end of the experiment, we expected to weigh the lettuce and snails again to measure the amount of lettuce the snails ate. Around 5 pm every day, we also measured the water quality of each box, so that we could know the changes in the environment the snails were living in. This experiment brought us much joy and an emotional connection with the snails. We felt we were really “living with” the little ones and got a tighter connection with Ndumo and the Living Lab!

Secondly, we dissected the collected crayfish to check for parasites and other relevant scientific data. The researchers from North-West University helped us a lot in the crayfish anatomy and data collection, while the team also participated in and learned a lot from this process.

After 5 days of fieldwork, we had 2 days to analyse our findings. This was relatively short. However, we used these last days to compile data from all the water groups and to make a short presentation from our preliminary findings. For the freshwater snails, we found not only our species of interest, T. granifera, but also invasive snails from the family of Physidae that specifically live in standing water. Interestingly, both taxa were spotted outside the Game Reserve in the Phonglo river systems and were absent in the Usuthu river. In the case of water hyacinth, a similar pattern was demonstrated as they were only identified in the Phongolo River systems with low abundance. We also observed other invasive water plants, such as water lettuce, water fern, and an aquarium plant. Uncovering the presence of these invasive species may indicate a reduced water quality in the Phongolo River system. And what about the red claw crayfish? This species apparently was found at sampling sites both outside and within the reserve, along the Phongolo and Usuthu river systems. Basically EVERYWHERE! Their presence would threaten the survival of native crayfish by edging out the food and other resources. They can also carry parasites to which local crayfish have no immunity. Despite the negative impact on the environment, they serve as a potential food source for the community.

On a more general note, we can conclude that the living lab has been a particularly instructive and rewarding experience. We not only learned a lot about sampling invasive species and assessing water quality by reviewing the existing literature, but were also able to apply this knowledge in a practical context during the fieldwork. The interdisciplinary approach of social and ecological topics during the study trip will definitely be an added value during our future careers as sustainability experts. We also got to know each other better on a personal level and improved our team-working skills. Furthermore, we met many other amazing people such as the translators for the interviews, the inhabitants of the local communities and the managers of the Ndumo Game Reserve. Overall, the living lab was an enriching experience for all of us. Siyabonga, South Africa!