A long and slippery day in the life of an aquatic field biologist: What happens in Leuven, does not always stay in Leuven 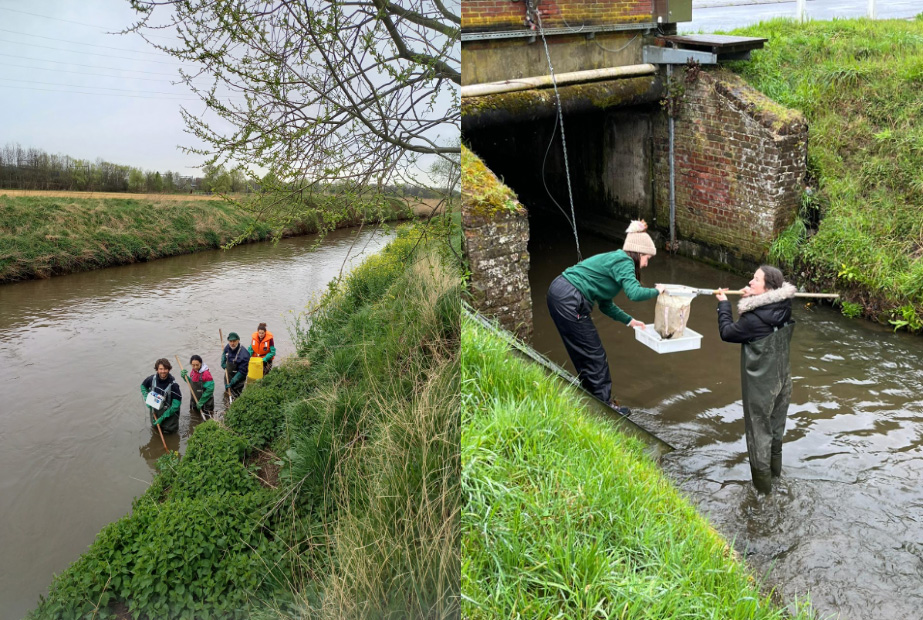 Picture of two students putting the macroinvertebrates caught into a bucket for analysis (left) and a picture of students and professors catching fish with the electrofishing technique (right).

In the 2022 Living Lab the water group embarked on an exciting journey into the rivers and streams of Flanders (Belgium). The purpose of this mission was to investigate how water quality is linked to anthropogenic activities and land-use in the Flanders area. Flanders hosts a few large river systems which all drain into the North Sea. Some of these rivers are shared with neighboring countries like the Scheldt which flows through France, Belgium and Netherlands.

We focused on collecting data from the Ijse and Dijle Rivers which are tributaries to the larger Scheldt river and to graph different land-use types in the nearby area (agriculture, industry, households, forest, grassland, etc.). Our fieldwork consisted of a range of activities from measuring abiotic characteristics (pH, conductivity, temperature, etc.) to biotic characteristics (macroinvertebrates and fish). To catch the macroinvertebrates we used big nets and waders in the water, trying to maneuver around and catch as many as possible.

As for the fish, we used an electrofishing technique where we walked up and down the stream trying to stun fish and catch them with a net (don’t worry the fish were only stunned for a couple of minutes and they were eventually released back into the water!) (Figure 1). It was here where we came across a very cool and interesting species. The European Eel (Anguilla anguilla) was caught in abundance in this survey (Figure 2). This is excellent news as the IUCN (list of threatened or endangered species) has classified this species as critically endangered with a declining population in 2018. There are various reasons for this mostly over consumption (many Belgians considered, and still do, as a delicacy) and natural system modifications like the building of dams to stop the emigration required for the full life-cycle to occur. 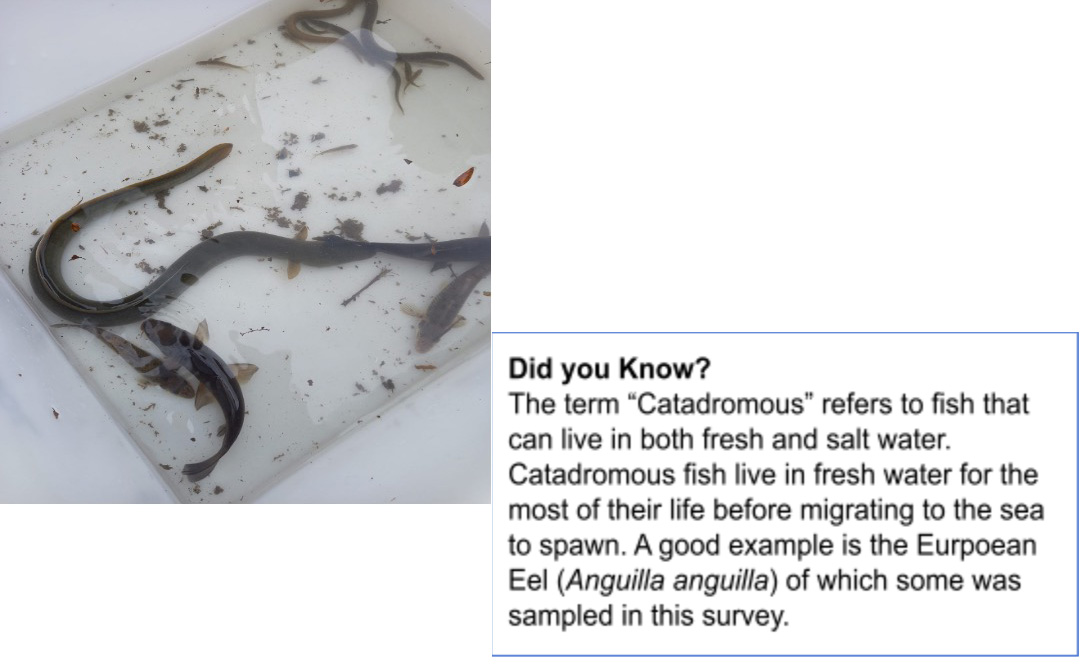 Picture of some of the eels we caught in the river Dijle for the living lab.

They are full migrating species and between late winter and early spring, eels are assumed to spawn in the Sargasso Sea in the West Central Atlantic. The eggs hatch and larvae travel back across the Atlantic to begin the continental phase of their life cycle. This shows how these amazing animals travel 100’s of kilometers in order to spawn and complete their life cycles. The fact that we caught an abundance of them suggests that populations are making a recovery and may be doing better than expected.

However, in Belgium today people are not allowed to eat eels from any water body. This is not only for overfishing reasons but also because of the enormous amount of chemicals and toxins that they accumulate. Eels live in both polluted and non-polluted waters, therefore if there are any chemicals or toxins entering the water from industry, the eels will ingest these bad substances over time. This is also known as bioaccumulation. In Belgium industries have heavily polluted the river systems for decades, therefore eels are vulnerable to bioaccumulation. Most eels have been tested to have high levels of PBDEs, PCBs, DDTS, and HCBDs (all toxic substances). Therefore it is dangerous for humans to consume freshwater eels that have bioaccumulated these toxins.

After they were captured, we weighed and measured the eels as part of the data analysis process (the largest eel we got was 60 cm!). Some of our classmates were courageous enough to touch the eels and didn’t mind having their hands slimy and wet. The slimy coating serves as a physical barrier for the eel, protecting it from infections and parasites. The key to taking up an eel, according to our supervisors, is to lift it rather than squeeze it. We also learned to be as quick and efficient as possible in order to avoid stressing the eels (and the other fish we collected). It was important that we released them back into the river as quickly as we could. 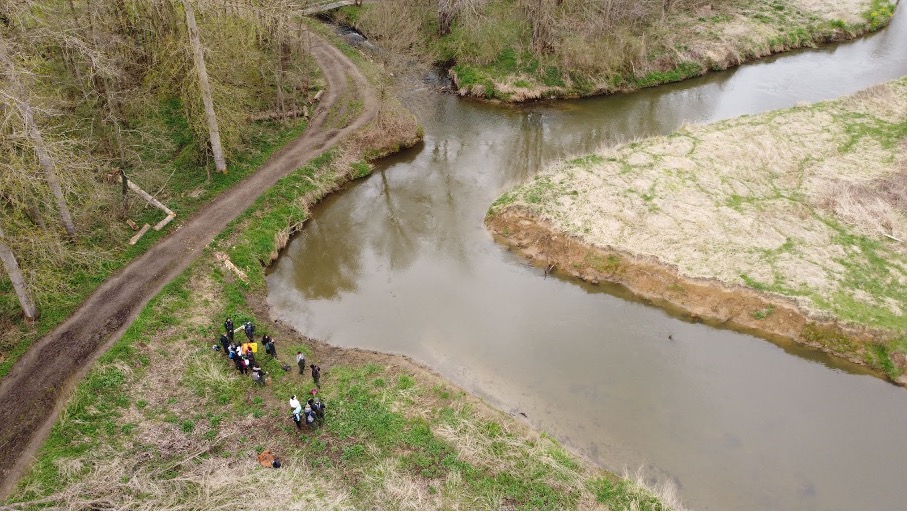 The Ijse River meeting the Dijle River (in the Doode Bemde).

While catching eels was an exciting part of our fieldwork, the Water Group also completed many other tasks throughout the day (rain or shine) to ensure we collected enough data to support our development plan. A typical day in the water group consisted of visiting about three-four sites by bike, either on the Dijle or Ijse Rivers. At each site, we would split into three groups: abiotic, biotic-macroinvertebrates, and biotic-fish. The abiotic group was in charge of measuring the depth, width, and flow rate of the river. They also measured pH, conductivity, and other abiotic variables with two devices. The macroinvertebrate team was responsible for catching the organisms with a net (figure 1) and then putting them into a small container filled with ethanol. This is so that later in the lab we were able to identify what we caught, which is an important part of measuring water quality. 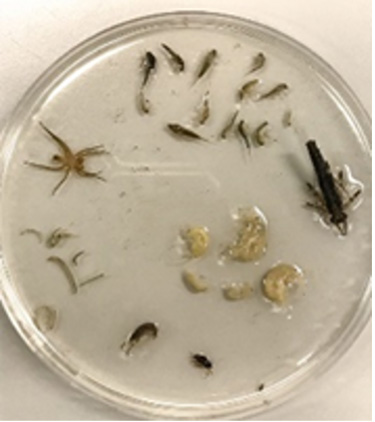 Some of the macroinvertebrates we caught in the river.

Finally, the biotic fish group went electrofishing at the site and tried to catch as many fish as possible. Once the fish were caught they were then swiftly weighed and measured before we put them back into the river.

Now that the fieldwork has come to its end, the Water Group is eagerly working on the development plan. In this development plan, we aim to discuss our main findings and use these to recommend how the Flanders Region and the Brabanste Wouden national park can integrate a sustainable water management plan into the region.