A day in the Global North: the Land Group’s fieldwork experience 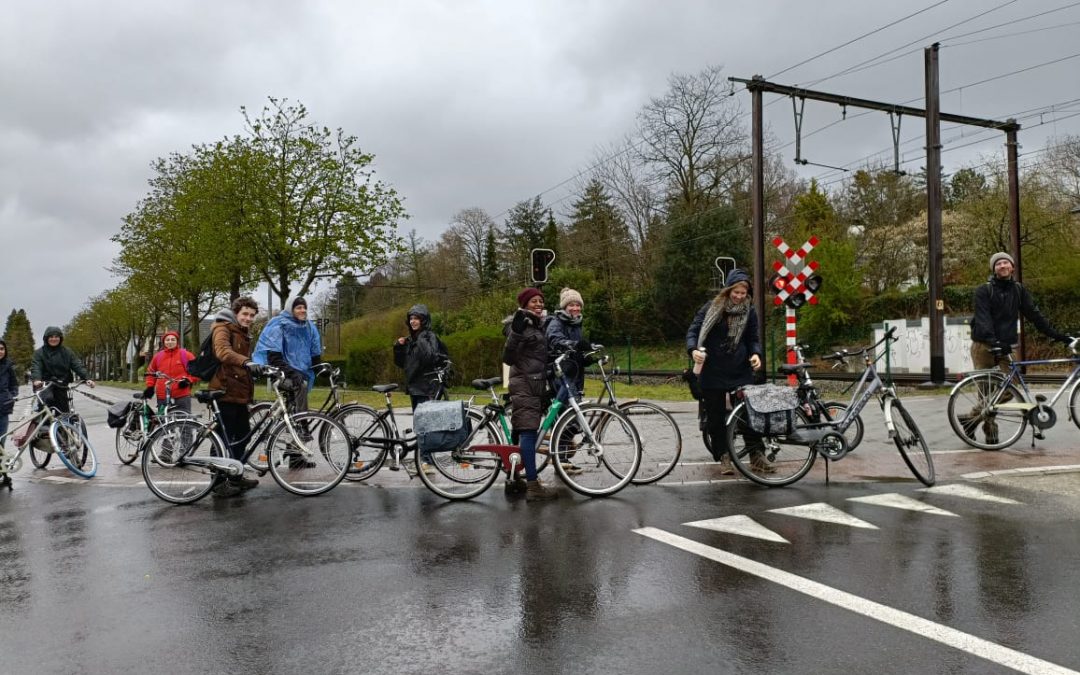 Thursday, April 7th. 7 am. I am sick, tired and, if I’m right, I think I can hear the rain outside my window. Definitely not the best weather of the week.

Today is the fourth day of the living lab and finally my turn to lead the land excursion. Although, as a group, we had a very useful preparatory session, I am not 100% confident with the methodologies we are going to apply today: it is basically not my field, but I am still willing to give it a try. At least, we, in the land group, are really lucky to be working with Bruno and Eric, who have been really helpful in the last days, and, as I have heard, they give you a hand throughout the whole activity.

8 am. Yes, I made it on time -as always-. People arrives: they don’t seem very happy, maybe it is because of the rain. Hopefully not because of today’s activity. We start with the daily routine: say hello to friends, go upstairs to leave the lap top in the lockers, and have the brief meeting at the front door of the geo-institute before taking our bikes and going into the field. It is still a bit strange to call this a fieldwork: we are used to think of the field as a distant, isolated space, and somehow alien to our “normality”. On the contrary, I’m listening to the latest album of The Babe Rainbow on Apple Music while cycling through upper class neighborhoods in Leuven, Belgium. However, this should be a first point to reflect on: how far do we have to go to actively contribute to an environmental cause from “the ground”, from “the field”? Do we really have to go deep into the African rainforest to feel that we are doing field research ? Not really, but I still wish we were in South Africa.

9 am. We finally made it into the first agricultural plots. On previous days it was easier to wait for people riding at slower speeds, but, now, with the rain, I can hardly turn around to see who is behind me. There are many people struggling with the hills we have to climb every day to reach our destination. I feel bad for them. I know cycling is the most sustainable form of transport, but have the teachers taken into account how difficult it can be for some of the people? Not just the actual act of cycling, but having to do it in this temperature, under the rain and, by this fourth day, with half of the classmates already sick. Maybe this is why people were angry at the beginning. I don’t know. But as I was saying, we arrived in the field, and now it is time to start taking the samples for the soil analysis.

This first part is definitely easier than the next one: we only have to use the auger and the Kopecky ring to take soil samples in different parts of the plot and carefully place them in different bags according to their depth. The truth is that we are actually doing very well, we are just about to finish. Oh no, first mistake of the day: we put 5 cm samples in the 30 cm bag. We have to start everything from the beginning, but to be honest, this is not really difficult.

In parallel, some people are looking for earthworms. Some pick them up as if they were real experts in collecting earthworms from the soil; others seem to suffer as they watch our interaction with these small individuals. In any case, I think it is important for all of us to commit ourselves to the cause. At least there were no problems in this second activity: this time we were very careful. Now it’s time to go into the forest. I wish I was more enthusiastic, too bad I’m sick, wet and cold.

11 am. We made it into the forest. The first group arrived before and they are already having lunch. At 11 o’clock in the morning. I can’t have lunch at this time of the day, but we all sit down and have one of those funny conversations that day by day have given me the strength to carry on with this fieldwork despite the adverse weather conditions. Today’s topic is non-verbal communication: apparently, what in Belgium a raised little finger provides you with a beer, in India is used to ask for permission to go to the toilet. By the end of this useful conversation, we take our bikes back and split up once again to go straight to measure the biodiversity of the forest.

11.30 am. After leaving our bikes, Eric initiate us with two particular facts about the exact place where we were at that moment. First, we were in an ancient forest: despite the various changes that may have taken place in the landscape, the trees around were the same as they were a couple of centuries ago. Second, we were standing on a species of plants that take decades to recover from being stepped on, as we were doing at that precise moment. We really didn’t know, the information came a bit late.

After the brief clash between culture and nature, we take out the tools and start with a second measurement process. First, we define the 20×20 and 10×10 areas in which we would proceed to perform the exercise. After this, we start to identify the plant species in the quadrant. For this, the use of the telephone app was unnecessary, as Eric knew each of the species, helping us to identify them and measure their coverage within the area. Later, we split into two groups. One start to do the same activity we did in the agricultural plot, and the second measures the height and girth of the different species of trees. Due to the lack of leaves, we could not use the densimeter to measure the canopy cover. However, the basal area had us all spinning 360 degrees around ourselves in order to measure forest density. Finally, we gather our things and return to the road trying to step on the least amount of those highly vulnerable plants we already had a first conflict with.

14.00. We went back to the lunch area, and now I did have lunch. After this, I checked all the forms to make sure that all the information has been filled out correctly. The weather is better, you can even see some sunshine coming from up there. We all come back together again, talking, riding our bikes, trying to catch up in 20 minutes on everything we couldn’t in the past years due to the restrictions imposed by the pandemic. Again, that feeling of being at the right time in the right place. But at the same time a certain sadness for not having had the possibility of sharing more spaces like these with people that after these two weeks I can only consider them my friends. Because beyond all the learning acquired by the activities carried out on the river, in the agricultural plots, in the forest, at the gate of the park, what I really will keep with me is the opportunity we finally had as classmates to get closer and live/suffer together this fieldwork in the Global North.

15.00. Finally, we all return to the lab to weigh worms and, later, participate in the ritual of their return to the soil that some colleagues decided it was important to perform. We wash everything, grab our bikes, write “someone beers, now, in Oude Markt” in the WhatsApp group, and head out to close the evening drinking a good monk-produced beer among friends. 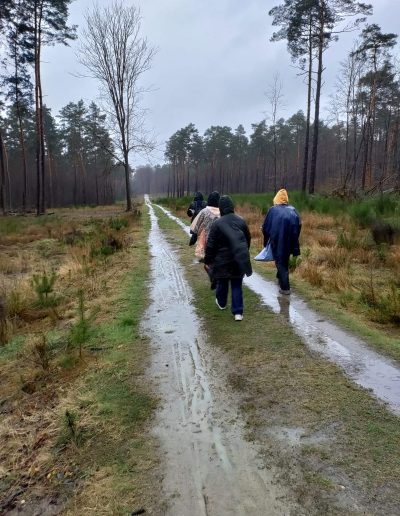 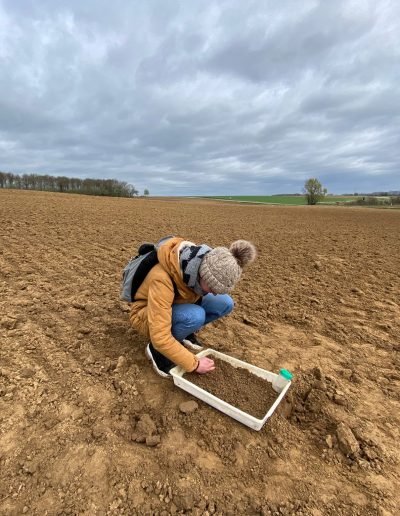 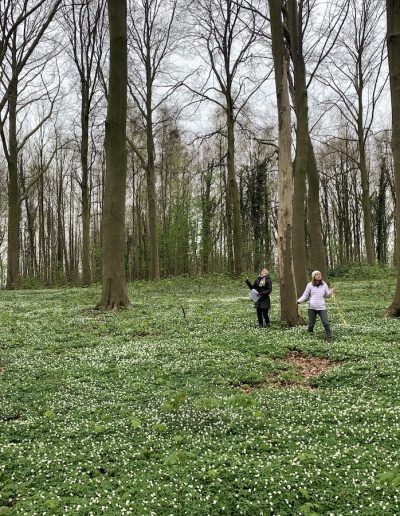 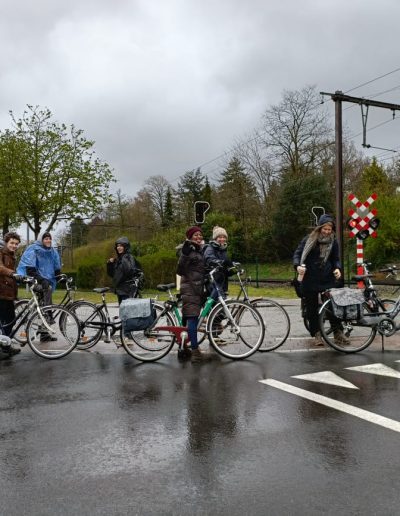